The Olympic Swimming coin (Aquatics 50p) has no recorded sales yet this year however there is one for sale on eBay for an eye-watering £4,000 value.

Is this value realistic? this is such a rare coin that its value is what-ever a UK coin collector is willing to pay for it on the rare occasions that one comes up for sale.

We are monitoring further updates.

Rare 2011 Aquatics 50p coin with lines across the face

The Aquatics 50p coin was first released for the London 2012 Olympics with an image of an Olympic swimmer with water covering the face.

In a late modification, the lines across the face were removed so that the face of the swimmer is visible.

Only 600 of these Olympic 50p swimmer coins were issued with the other 28 Olympic Coins and sold across the UK in shops in their coin packs.

This makes this coin the rarest 50 pence to be released. check our 50p Coin Values for pricing.

This is the second edition design, without the lines across the face.

The Aquatics 50p has a low mintage with 2,179,000 coins released to circulation.

It is estimated that only 600 coin packs with the withdrawn first edition of the swimmer coin were released to circulation making this a very rare coin that is highly sought-after by UK coin collectors.

Is the Aquatics 50p an error coin? 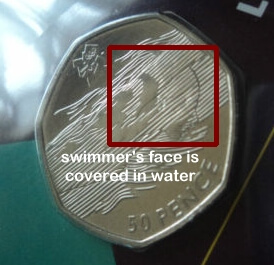 It is commonly referred to as an error coin however in our opinion it’s not a minting error as the design was withdrawn and changed to a new design. You could say they made an error in releasing it and then changing their minds over the final coin design so late in the process.

The Royal Mint decided to change the design so you could see the swimmer’s face. We suspect that most of the first design coins were withdrawn and destroyed from the shops.

How much is it worth?

Make sure you understand the difference in these coins before considering coins in sales listings as “rare”. There are also many fakes being offered for sale online so buyer beware!

How to spot the rare Olympic swimming coin?

A reminder of the rare swimmer coin vs the common one, left is the rare one where the swimmers face is covered in flowing water

Right is the common one where the swimmer’s face is visible.

See our 50p coin values page for a list of all 50p coins (with images), their mintage, and approximate value. See other rare coins.

Beware! due to the high value of this coin, we have seen many fake coins listed for sale.

Check the listing details for the word “COPY” or “IRB COPY”.

Manage Cookie Consent
To provide the best experience on ukcoins.co.uk we use technologies like cookies to store and/or access device information. Consenting to these technologies will allow us to process data such as browsing behaviour or unique IDs on this site. Not consenting or withdrawing consent, may adversely affect certain features and functions.
Manage options Manage services Manage vendors Read more about these purposes
View preferences
{title} {title} {title}
Go to mobile version