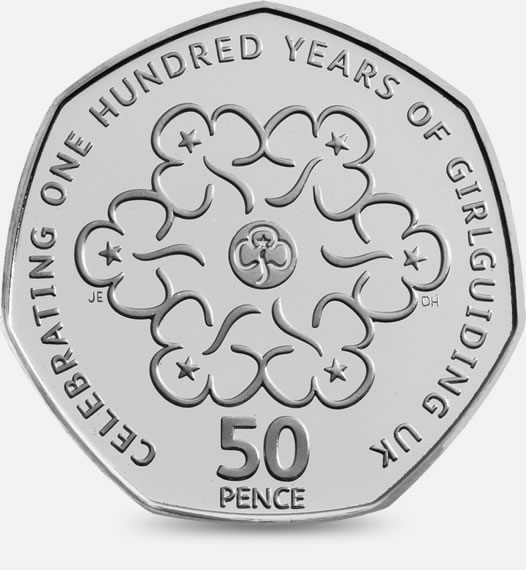 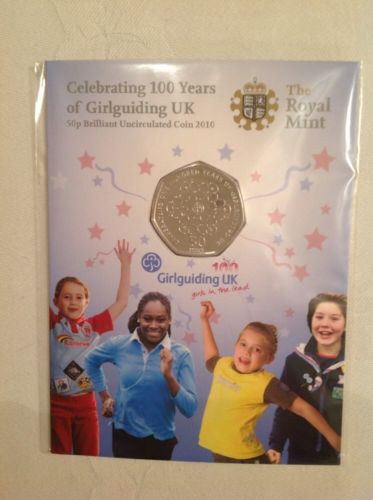 Example BU Coin in original coin pack, we have seen other designs for sale.

On the 8th February 2010 The Royal Mint celebrated the 100th Anniversary of the Girl Guides Association by launching a Girlguiding 50p Coins centenary coin range.

The Girl Guides is the largest girl-only organisation in Britain.

The reverse features ‘The Trefoil’ allocated in a circle surrounded by the wording ‘Celebrating One Hundred Years of Girlguiding UK’ and the denomination ‘50 Pence’.

It has the wording Elizabeth II as well as the year date 2010, on the obverse.

If you want to know how many Girlguiding 50p piece coins were made, the minted quantities quoted by The Royal Mint for this coin are:

The source of the Mintage information is from The Royal Mint website.

How much is the Girl guide 50p worth?

From our own manual research of completed sales on ebay.co.uk we have seen coins selling for:

The 100th Anniversary of the Founding of the Girl Guides

By 1910 Robert Baden-Powell’s scouting movement was taking off all over the world, so he asked his sister Agnes to start a similar group for girls.

Through a mixture of fun, adventure and friendship the movement has inspired each new generation to face the challenging of growing up and to be the best they can be.

The trefoil logo represents the threefold promise of the Guides – ‘I promise that I will do my best, to be true to myself and develop my beliefs, to serve the Queen and my community, to help other people and to keep the Guide Law.’

Britain shivered in the longest cold snap for 30 years, Kathryn Bigelow becomes the first woman to win the best director at the Oscars for The Hurt Locker, ash from a volcanic eruption in Iceland grounded flights for several days and the general election gave us a hung parliament, necessitating a Conservative-led coalition.