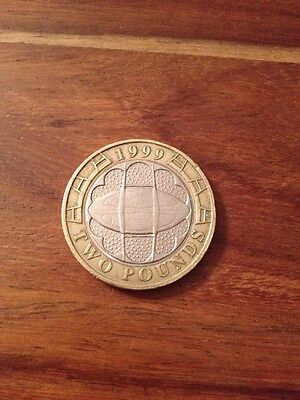 Recent eBay sold listings for this coin indicate that a circulated coin in good condition is worth £2.75.

Design depicts a stadium full of supporters (the dots), upon which is superimposed a rugby ball and goalpost. The date ‘1999‘ above separated by goal-posts from the value ‘TWO POUNDS‘ below.

RD in tiny letters inside the goal post to the right of the ball are the initials of the coin designer, Ron Dutton.

In 1999 the world’s finest rugby-playing nations came together in the spirit of competition to battle for the Wed Ellis Cup in the finals of the Rugby World Cup.

Hosted by the Welsh Rugby Union, the matches were played at venues throughout the five nations of England, France, Ireland, Scotland and Wales.

The pulsating atmosphere, movement, sound and colour of the great game of Rugby and the enthusiasm of its spectators were captured by Ron Dutton on the reverse of the 1999 two-pound coin struck to commemorate this eagerly awaited sporting event, the 1999 Rugby World Cup.

The mintage figures for the Rugby World Cup are: