Marking the 400th anniversary of the Gunpowder Plot.

These coins are an arrangement of crossiers, maces and swords surrounded by stars and the dates 1605 & 2005. Denomination TWO POUNDS below. Also known as the Guy Fawkes coin although there is no mention of Guy Fawkes directly on the coin. 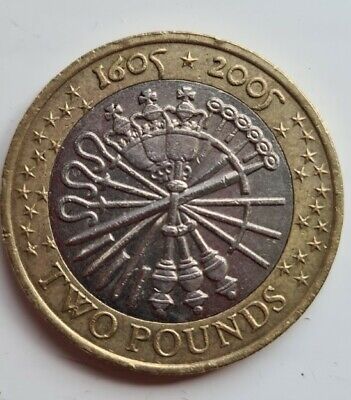 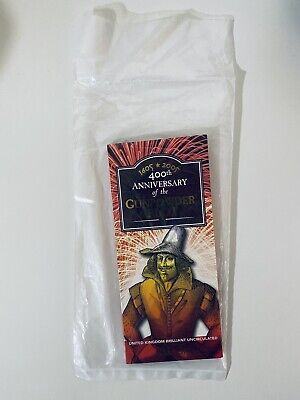 Recent eBay sold listings for this coin indicate that the current value for a circulated coin in good condition is £3.00.

The edge inscription of the Gunpowder Plot coins read “REMEMBER REMEMBER FIFTH OF NOVEMBER”. There are examples of this coin in circulation where the down-stroke of the leading R is not well defined.

From a distance, it makes it read “PEMEMBER PEMEMBER FIFTH OF NOVEMBER”.

The Royal Mint has not admitted the mistake as an official minting error. A spokesperson said: ”It’s likely to be a consequence of the production process. It’s very, very infrequent that we issue coins with an error. We have quality control to detect any defects.”

We have seen these listed for sale as “rare error coins” for hundreds of pounds. They are fairly common and can be picked up for just a few pounds on eBay.

The mintage figures for the Gunpowder Plot are:

An arrangement of crossiers, maces and swords surrounded by stars and the dates 1605 & 2005. Denomination TWO POUNDS below.

The plot to assassinate King James I at the opening of Parliament on 5 November 1605, thankfully thwarted due to the anonymous letter sent to Lord Monteagle, is a piece of British history that shall ‘never be forgot’.

400 years later, in 2005, The Royal Mint remembered the Fifth of November with a splendidly-detailed two-pound coin. In the words of the artist Peter Forster its intricate reverse design shows symbols of State, represented by the mace, crosier and sword alluding to the survival under threat of the British establishment.

The circular arrangement in which they are shown is also suggestive of a Catherine Wheel and the surrounding stars are a further reference to fireworks. The dates are rendered in an early seventeenth-century style of font.

Read more on the story of the Gunpowder Plot of 1605.