This two pound coin depicts a stylised figure of an athlete holding a banner and the inscription XVII Commonwealth Games 2002.

A small circle behind the athlete contains a flag with a cross, with a crowned hand inside a six-pointed star in its centre – representing Northern Ireland.

The coin design depicts a stylised figure of an athlete holding a banner and the inscription XVII Commonwealth Games 2002. Initials “MB” are for the designer Matthew Bonaccorsi. 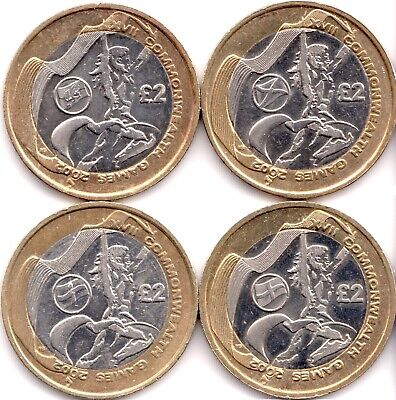 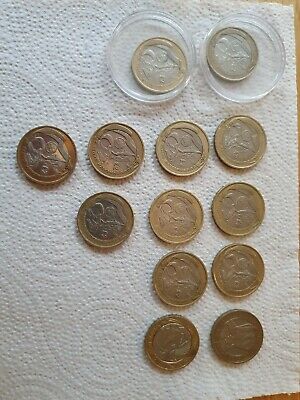 The Northern Ireland flag variant of the 2002 XVII Commonwealth Games coins is the rarest coin in the set and the rarest £2 coin in circulation. Recent eBay sold listings for this coin indicate that the current value for a circulated coin in good condition is £38.00.

The mintage figures for the 2002 XVII Commonwealth Games (Northern Ireland) coins are:

The 2002 Commonwealth Games £2 Coins are a four-coin set released into general circulation. The mintage figures for all coins are:

From 25 July to 4 August 2002 the city of Manchester played host to the Commonwealth Games.

In the biggest competition in the seventy-two-year history of the games some of the world’s greatest athletes competed in fourteen individual sports and three team sports over ten spectacular days of sporting and cultural activity.

To mark the celebration of sporting excellence, The Royal Mint issued a commemorative two-pound coin.

Matthew Bonaccorsi’s reverse design, the winning entry in a competition, represents celebration, victory and sportsmanship. It depicts a moving figure holding aloft a banner, the top of which is divided into lines symbolising the lanes of a swimming pool.

The design is completed with the edge inscription SPIRIT OF FRIENDSHIP. MANCHESETER 2002.

Four versions of the coin have been produced, one for each of the participating teams from the United Kingdom and distinguished by a cameo version of their respective flags.

14/09/202015/03/2021 UK Coins
We use cookies to ensure that we give you the best experience on our website. If you continue to use this site we will assume that you are happy with it.AcceptPrivacy policy