The Decimal Day 50p (also known as the Decimalisation 50p) is a new coin from The Royal Mint in 2021 celebrating the 50th Anniversary of Decimalisation.

Available from 9 am Monday 11th January 2021 as a commemorative coin in base metal, Silver and Gold limited editions.

Click the button below to shop the range of coins available for sale.

How much is the Decimal Day 50p coin?

Here are the prices from The Royal Mint on day of release:

It is also available as part of the 2021 Annual Coin Sets.

How many Decimal Day 50p coins are there?

What’s the bird on the coin design?

The beautiful design of this coin has caused quite a stir in the UK Coin Collecting community. Which pre-decimal coins you can spot on this commemorative 50p coin?

The 50th Anniversary of Decimalisation 50p reverse design depicts scenes from pre-decimal British coins such as the unmistakable wren bird from the British Farthing coins.

The other parts of the coin depict the crown of a threepence, sitting alongside the rose of the sixpence, next to an iconic Britannia, and all of the coins are the actual size they were 50 years ago.

I really hope that this design will be a nostalgic reminder and talking point, and that people will not be able to resist getting out their old pre-decimal coins and placing them on top of this coin with a smile.

Interestingly, the obverse (tails side) of the Decimalisation fifty pence coin has been struck with a twist!

The Decimal Day 50p coins IN THE ANNUAL COIN SETS feature the second effigy of Her Majesty The Queen on the obverse (dated 2021). The coins in the single commemorative coins feature the usual fifth effigy.

This portrait was created by Arnold Machin RA for decimalisation to mark the transition and help people identify the new coinage. This nostalgic portrait has been struck for this special anniversary and will only appear on the Decimal Day 50p coins that have been struck for the 2021 Annual Sets.

What is Decimal Day?

Decimal Day in the UK and Ireland was the day on which each country decimalised its respective £sd currency of pounds, shillings, and pence. Read more about decimalisation here at The Royal Mint Museum.

Taking place on 15th February 1971, before this date in the United Kingdom, the British pound was made up of 20 shillings, each of which was made up of 12 pence, a total of 240 pence.

The commemorative coins mark 50 years since the decimal currency system was formally adopted on February 15, 1971, evolving from pounds, shillings and pence. 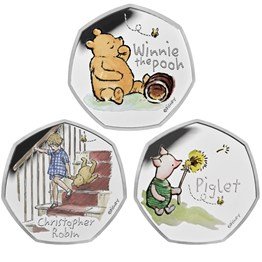